Rolling with the Dot

Ladies, it’s that time of the month again. And if you’re like Shark Girl, you don’t want to let a little blood coming out of your crotch stop you from . . . oh, crap! We’re not drilling triangles tonight, are we?

Of course we are. Because I’ve got my period. And it’s some law of jiu jitsu that when I’ve got my period, we have to drill triangles, so that I can wrap my leaky regions around some guy’s face. It’s like when all that broccoli you ate last night gasses you up, you know it’s going to be “Knee on Belly Night.”

When I started training, I wondered what I was going to do when “That Time of the Month” showed up. I didn’t worry with other sports. I just popped a tampon in, and if I was really worried, added a pad, and was done with it. In jiu jitsu, my problem was three-fold: I only had my gym-issued white gi; I wondered if a pad could be felt; I was worried there might be womanly scents wafting around.

The first thing I decided was that I needed a black gi. Now I don’t worry about stray blood on my gi, because if it’s there, I can’t see it, and neither can my training partner. Problem #1 solved.

The second and third problems, scent and touch, were a bit harder to get over. It was Georgette (and my advanced age) that let me say, “What the fuck? Why am I worrying about that?” It was in a post (I can’t find it now, but maybe someone else remembers . . . this is a job for Slidey!) where Georgette discussed jiu-jitsu pantsing. You know, another thing we ladies worry about. What happens when your pants come down in jiu jitsu? Her reply was “Guys don’t worry their underwear showing, so I’m not going to effin’ freak out if mine peeks out,” or something like that. And I thought, “She’s right. And guys don’t worry about their periods, so I’m not going to worry about mine, either.” I pay good money for my gym membership and I’ll be damned if I’m going to miss out on 25% of it.

I’m pretty sure some of the ladies at my gym take a pass during their periods. They are mysteriously “gone” one week a month. Kind of like the Jiu Jitsu National Guard.

Now, for those triangles. I’ll admit it makes me a bit uncomfortable, but once I start drilling, I’m really focused on the moves and I hope my teammates are, too. I’m a woman of childbearing age, at least for the next few years. So, if the men in my gym can do math, and if they went to that awkward class in 5th grade where they explained puberty with puppets, and they see me at the gym without a break, then they must know I’ve got to have my period sometime. It’s a part of life, it’s a part of the human condition. I’m not going to deny it happens or lock myself away.
Okay, there actually is a puppet musical about puberty. Just thought you would like to know.

As I was writing this, I found this post over at Bunny JiuJitsu that talks about some ways of stopping the flow from getting in the way of your jiu jitsu habit, like a menstrual cup. I’ve never seen one before and will admit to being a little wigged out. Husband hadn’t seen one, either, until he walked in on me googling “menstrual cup.” I wish I had taken a picture of his face to share with you. Priceless.
Anyway, if any of you lady athletes have experiences with a menstrual cup, I’d love to hear about them, as I’m considering one.

Oh, one last period caveat. Ladies, remember that your ligaments are looser during your period. I wish I had remembered. This morning I hyper extended my knee without even feeling it. I feel it now, and will be taking some time off.

Here's Ellen to tell you about another great, new product for women!
at February 02, 2013 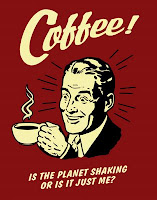