Well, I’ve been away from Jiu Jitsu for about a week. That makes me mad. Mad, I say. Mad with Hulk-like rage and anger. 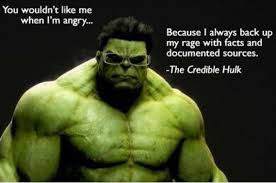 Things were going well. Too well, if you know what I mean. My physical therapist had graduated me from my knee instability sessions, which were starting to bore me anyway. Their only saving grace was that the therapist watched The Food Network. Shark Girl, who lives without the magic of cable television, could drool over Ina Garten’s latest food fetish, or wonder why Rachael Ray didn’t seem quite as enthusiastic as she had in years past. Was it Botox keeping her from emoting over that swish of EVOO?
I had started my summer regimen of running, too. The miles were creeping up every week, and by golly, my middle-aged belly was starting to show signs of a kind of 6-pack, albeit one with some plushy insulating material around it, just to keep it cold.

And then it hit me: an elbow. Right at the back of the head. With a loud thwack. No pain. No spinning, just, well, weirdness.
I sat up to see the couple-next-door looking at me concernedly.
“Are you okay?”
“What happened?” Shark Girl asked.
“We rolled into you. Sorry!”
“Oh. I think so. I think I’m okay,” Shark Girl responded tentatively. “I’m not hurt. I’m not spinning. But something doesn’t feel right.”
Shark Girl went home. 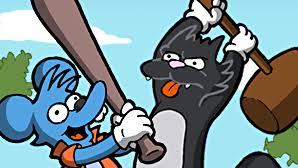 “That’s it,” I said to Husband. “I’m done. I can’t do BJJ anymore.”
“No you’re not,” said Husband.
“Yes, I am. The universe is trying to tell me something. I can’t be doing this. I’m a freaking middle-aged woman with kids. I’m killing myself. Probably giving myself brain damage. I was fine and healthy before I started BJJ. Now it’s always something. It’s either a sprained finger, or an unexplained rash, or a storm of kidney stones, most likely jostled loose from some damn mat throw. Now I’ve gotten a concussion, probably. This is ridiculous. I’m too old for this. I should take up tai chi. I’m going to take up tai chi.”
“No, you’re not,” replied Husband, gently.
“Yes, I am. . . . Why not?”
“Because. You’d be bored.”
He’s right. That’s the problem. I’d be bored to death. I would die right in the middle of one of those graceful, peaceful, arcs of the arm. On the spot. Dead. Dead of boredom.

But, what the fuck? A week after that fateful elbow thwack, here I am, feeling much more like myself, but experiencing strange head and neck twinges. Certain pitches rattle my left eardrum painfully and I have to keep yelling at my kids to stop yelling, even though they are using their indoor yelling voices, which wouldn’t usually faze me since I have pretty much given up on parenting.

Last week Husband forced me to see the doctor. “It will ease your mind,” he said.
After relaying some epic tale of his father having a strange household head injury that left him foaming at the mouth, the doctor proclaimed I had a “boo boo.” Yes, a “boo boo,” like I was a three-year old who skinned her knee on the playscape.

There is nothing that pisses me off more than interrupted training. I’m not good at taking time off. I’m even less good at relaxing. Why does this always happen to fucking Shark Girl? Why can’t tai chi be more interesting? Oh, well, I guess some mysteries will never be explained. And that’s why Shark Girl is so mad!!!

This holiday weekend, I visited family. Cousin of Shark Girl was there, too.
“Hey, Cous,” I wrote him in an e-mail sent while I was packing, “Should I bring my gear or what?” We like to train together at nearby gyms when we are together.
“Absolutely! My friend’s getting some people together tomorrow.””
I packed my gear bag and hopped in the car.

When we are in our hometown, Cousin and I usually train at a local gym that an old high school buddy of his goes to. They are welcoming and friendly, if not a little aggressive in their jiu jitsu style. Cousin’s friend always sets up impromptu open mats for us, inviting whoever can make it. No mat fee required, just collegial rolling.
The next day, Mother of Shark Girl fed my kids breakfast and I made sure that Husband was awake. I threw on my gi and drove to the basement gym where we were meeting. I was a few minutes late.
Down in the basement, things were just about to start. The music was playing, Cousin and his friend were there, and two other white belts, one a woman. Cousin had dragged along his elementary-aged nephew to get him out of the house. Everyone was warming up on the mats, so I joined them in mid-stretch, trying to catch up.
Cousin is a brown belt and was the ranking person in the room.
“How long do you want the rounds to be?” his friend asked him. “You are the guest.”
A couple other folks trickled in and I was pleased we had a good number for some round changing. The last time I was here there were only four of us and I went back and forth between Cousin’s friend and this crusher of a dude who pretty much made me hold my breath the whole time.
When the round started, I was standing closest to this twenty-something, buzz-cut-wearing, goatee-bearing, tatt-sporting dude with an unadorned white belt.
“Hey,” I offered with a tilt of my head. “Wanna go?” Around the room, the others were doing the same pairing dance.
“Uh . . . ye-aah . . . I wanna see who’s open,” he said, looking away toward the others.
You want to fucking see who’s open? Dude, I’m open! Shark Girl thought. But Shark Girl just looked quizzically at him as he moved on to see if my brown-belted cousin was available. Cousin had already partnered with his friend, and so Buzz Cut snagged the other white-belt female. Shark Girl, stunned by his words, had lost the chance to partner up.
Cousin’s nephew was punching the bag, so I joined him, giving him pointers and he showed me the elementary jiu jitsu moves his uncle had taught him. Well, at least I can bond!
The next round, I rolled with Cousin’s friend, a lovely, large man who knows enough jiu jitsu to rely on it and not his strength. I ended up working my guard, which he had trouble passing, and when I got on top, he was quick to prevent my side control. Buzz Cut rolled with Cousin.
At this point I was chastened to ask others to roll. Hey, I'm no brown belt, but I was the second ranking person in the gym, by quite a few stripes. Looking around the basement, I saw Buzz Cut orbiting Cousin like he was some hot, A-list celebrity.
A one-stripe white belt bounced up to me. “I’m Luke!” He smiled and asked for my hand, er, to tap hands. He rolled like an eager puppy, and I had him ready to choke in about thirty seconds, but I let him escape out of it. No need to crush that enthusiasm!

The next round, everyone had paired up except for me and Buzz Cut. Was he going to approach me? I thought? What would I say? Would I accept, or find a reason to refuse? He was on the other side of the mat and without making eye contact, I headed back to Cousin’s nephew and worked with him on the bag. No need to worry—Buzz did not come anywhere near me. If I sit out two rounds in a row, I’m going home, I planned.
At the buzzer, Buzz Cut started making his way into Cousin’s gravitational pull. Cousin looked up at me and said, “Let’s go next!”
It’s always a good roll with Cousin. A larger, much stronger, and more skilled opponent, Cousin knows how to roll with a person half his size without compromising the integrity of either of our rolls. Or perhaps he knows that if I get hurt rolling with him, his father will give him a kick in the fanny.
I rolled a second time with Cousin’s friend and then with another white belt who had showed up. I asked Cousin to help me with a technique that has been clinking around in my head, and he gave me a pointer on defeating side control (bane of my existence).
Sensing that I had rolled with everyone interested, I recused myself before the next pairing. I cited family statutes of limitations and anger thresholds about to be crossed by Husband if I didn’t return to help rein in our two sons in the toyless and short-tempered environment of their grandparents’ house. I thanked everyone, especially Cousin’s friend for organizing the open mat. I stuffed my mouth guard in my bag, swigged some water, and climbed out of the basement, gi damp with the sweat of several people. Not a bad Fourth of July!
at July 07, 2014 10 comments: