When Shark Girl received the Scramble Bushido Athletic Shorts from BJJhq.com, they were cartoonishly large. “I can’t review these!” I thought. “If I can’t find someone else to review them, I’ll have to send them back.” I did some recon and found this description of the shorts at the Scramble website:
“Scramble shorts are here to pimp up the lower half of your body! Featuring side split seams and a spandex crotch panel for Muay Thai / guard players and the well endowed.”
Whom did Shark Girl know that was interested in pimping up the lower half of his body? It was obvious: Cousin of Shark Girl. You have read about Cousin of Shark Girl before here and here.
Actually, Cousin of Shark Girl is quite modest and I didn’t think he’d want to pimp up his body at all. Nor does he do Muay Thai. But he is a guard player and I’m pretty sure he is in favor of spandex crotch panels. As for well-endowed—chill out, he’s my cousin, already! This along with the fact that Cousin of Shark Girl is the only BJJer who knows Shark Girl’s real identity made him the perfect candidate. The only candidate.
Cousin of Shark Girl accepted the challenge and has been wearing the Scramble shorts tirelessly. Dear readers, I introduce to you my very first Guest Blogger: Cousin of Shark Girl.
***
While visiting my cousin, Shark Girl, she let me try out a pair of grappling shorts, the Bushido by Scramble. These shorts came to my cousin via BJJhq.com, a great site that keeps me up late at night, refreshing my browser, looking for deals on grappling gear. BJJhq.com is very popular where I train so I’m happy to help them out with a review.
The shorts are purple with bright yellow lettering. I must admit that I was a little concerned when she first showed them to me. I’m the kind of guy who does not like to stand out in a crowd.﻿﻿﻿﻿ ﻿ ﻿﻿
The yellow lettering includes some Japanese kanji symbols for the word “Bushido” which roughly translates to “the way of the Samurai.” Thanks, Wikipedia. 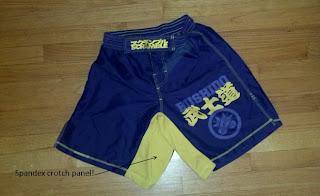 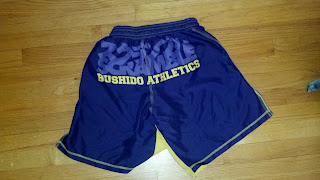 The shorts are a size Small and Shark Girl said they were way too big for her. I have a 32” waist and when I put them on, they were snug around the waist but not constricting due to the fact that they have an elastic waistband. Once I cinched the Velcro strap and drawstring, I actually thought they fit very nicely. 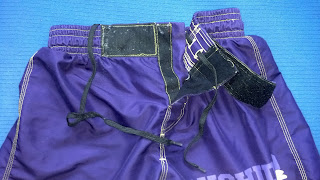 I’m about 5’9” and they do show a little more leg than my other grappling shorts, but I actually liked that.


I have a few other pairs of grappling shorts that are longer, baggier, and clumsier looking in my opinion. The Bushido shorts also have a small slit along the outside of the thigh that helps with leg mobility. In addition, they’re 100% polyester which makes them slick and light.
Sure, they felt great while I was prancing around my living room, but the true test would be how they held up going full speed at the gym. They are light and thin and my biggest concern was that they wouldn’t last too many tough grappling sessions. I couldn’t have been more wrong. I’ve worn them dozens of times and not a stitch is out of place. And they are so light that I feel like I’ve gained a step on my training partners—if I can only convince them that that’s the case. One last comment: I actually received a handful of compliments on how the shorts looked. I’m still not a fan of the colors, but they are currently my favorite grappling shorts as far as performance and feel are concerned.
Pros:
Con:
I hope you found this review helpful. That's all for now folks!

Respectfully Yours,
Cousin of Shark Girl